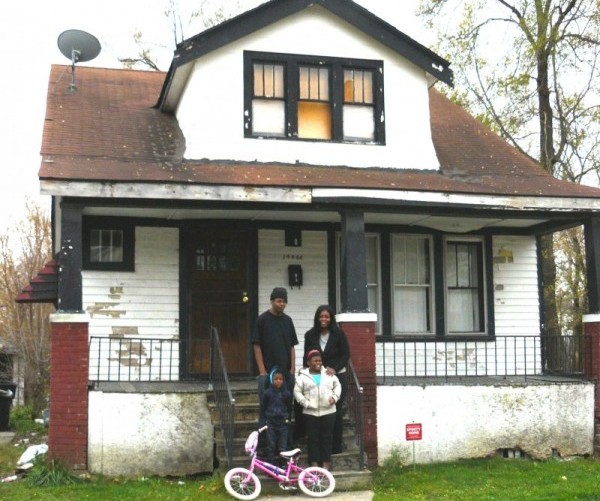 This is the story of Demitrius, Ebony, and their three children who live on Hazelridge in Detroit’s east side. They paid to buy the house when it had been in foreclosure for almost 6 months, and didn’t even know they’d been wronged. This conversation is mostly Ebony’s words, but Demitrius contributes as well, his words are italicized.

They are now the rightful owners of this house, having won it in auction for $500, and so the tradition of the Colvin family living on Hazelridge continues.

Everybody in my family lives or lived on this block.

My grandmother has stayed over at her house since 1980. And my mom, my aunt all stayed in the house next door to her. And that’s the house that my cousin moved in after everybody had grew up. We stayed with my cousin before we got this house. Then I have another cousin that stays on the other side of my grandma. We’re just down the street.

Well, we first were staying down the street from my house. We had to move there because before we were paying, what? Like $750 in rent at a different house. We couldn’t afford it because I had lost my job.

But it was hard at my cousin’s- we have 3 kids. We saw this house was right down the street from where he stayed.

We had already had a deposit on the house. We were waiting 2 days later to move in. And her cousin put her out before we could get to the house. So what I had did was went through the window of the house.

We took our kids to my grandmother’s and we started moving our stuff there that night, that whole night.

The landlord, he seemed like was cool.  And things were going fine, as we thought it was.

And then, one of the little yellow slips came to our house.You know the little yellow slip that tells you that the house is supposed to go into foreclosure. So we gave it to the landlord, and we was telling him about it because we had a flood problem in the basement. He was always coming to snake it out for us.

After we showed him that, he kinda like fell off, but he was coming to collect the rent And he said that he was going to look into it but it should be nothing to worry about. So we said, “ok fine” he was the landlord.

We left. We was staying down at my mom’s because the house was so cold. And we came back to check on the dog. We had a rednose pitbull that was always in the basement named Tina, we had her for 8 years. But the water was up to like fourth stair, and it was all ice- she drowned in the basement the water got up so high.

It was frozen and she was down there.

The furnace and the hot water heater, and the dog- we lost a lot, going through that house.

So we stayed there, kept paying rent. We was paying $650 a month.

The landlord, he saw my husband putting up new cabinets, and painting, and stuff like that so he was like “yeah you guys want this house. Go ahead and take it off my hands.”

And I was like “well I do because I grew up on this block.” And, you know, told him everything that was going on. My grandma’s right down the street, in case I need help with the kids or an extra sitter or something like that. And my whole family’s over here. So we really did want the house.

He told us that if we give him $1000, that the house would be ours. So we gave him the money. And we’d have to catch up on the taxes ourselves. And so we had the money we had been putting towards rent, we can use that and try to pay off the taxes. We’ll have our own house and it won’t be nobody else’s.

We don’t have a car and he was going to be our transportation for that.

We kept getting foreclosure letters after we paid that money.

Then, I think it was later in August when the flood happened, the basement flooded out again.

When we called we told him about that we had got another letter saying that the actual house was going into foreclosure this month and that we had until I think January to be there.

And he never came. He never showed up.

After all that we’re losing it.

I put it like this. We need a house and a car right now. But we’d rather go broke getting that house. You know what I’m saying.

If we’re there this winter, we need to have heat. That’s what we need to be working on right now, because the furnace that was down there is broken, after that flood.

Now we’re kinda at like a standstill to make sure that we’re going to be able to get to continue the work that we’ve been doing.

The furnace and the hot water tanks and stuff. We just got the roof changed, we need to get the furnace now. That’s about it.

I’m not working at the time, not right now. I do “trash outs” I work with her godfather, trashing out houses and concrete, that type of stuff. And he just caught a DUI, so he’s got the little thing you gotta put on your ankle, and he can’t drive for 6 months. He’s the business owner. And that was my work and my ride to work.

I do work on and off, painting for somebody who needs help. But as far as a real job, getting a check an all that, no, I don’t have that right now.

We’re going to do what we got to do to go ahead and get it. Whatever it takes.

We don’t think too much about losing the house. We aren’t thinking about the negative. If it happens, we start over somewhere else or figure out another way to go.

Aiyanna has Parawillie Syndrome, she’s a good girl. They moved her to a new school because they closed the section that they had for her at the other school. That school she was going to was father away, – she was in a special needs class. Now she’s in a new school east of here.

The other 2 , they can catch the bus right down the street. We used to have to drive them to the bus stop but then we lost their car. We had to catch the bus, catch the cab, just to get them to go to school. And they came back so quick!

They get to always go down there and get “grandma snacks” or something. When they get off the bus, the go up there to get snacks and things like that. It’s their great-grandma, my grandma.

Laniya the spoiled one, she’s the mamas girl she talks like she’s my age, very outspoken. Joshua is quiet, all he likes to do is play tablets -tablets and video games. And Aiyanna the sneaky one. She’s a sweetheart, everyone says they love her. They love all of them. Because they’re good kids.

My kids, they’re good kids, and they’re kids who don’t ask for a lot. They are very very grateful for what they have. They like that they have a home.