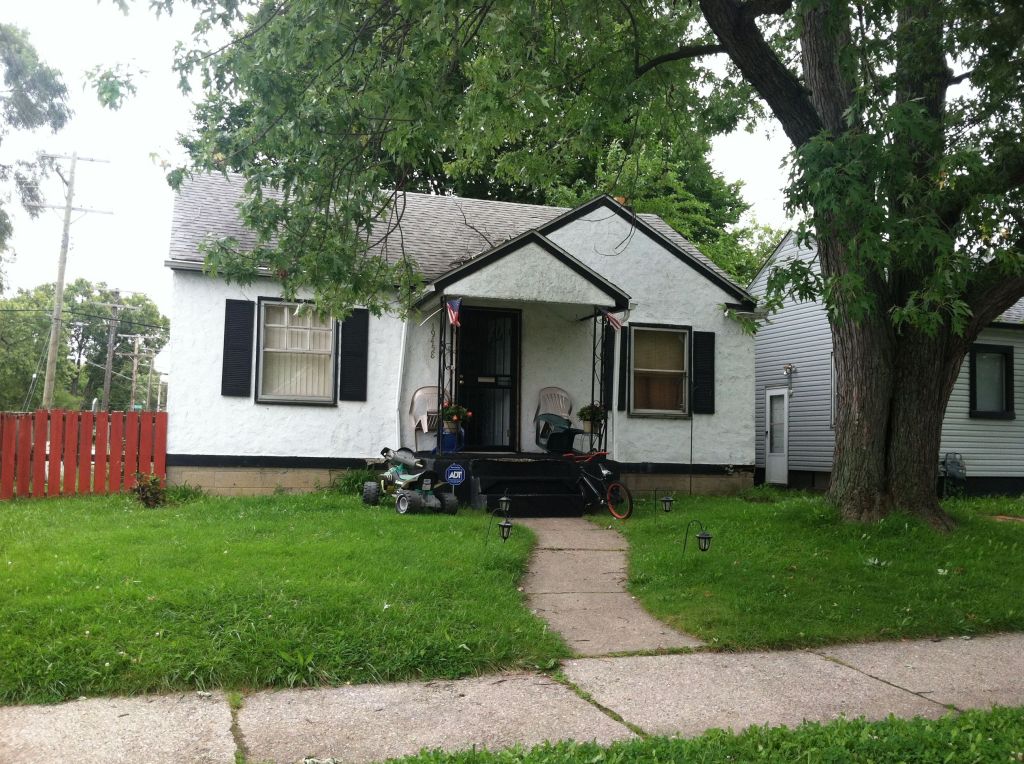 This is the story of Katheryn and Cliffton Brooks and their home on Eureka Street. Katheryn is speaking for the most but Cliffton gets a few words in too.

We successfully won the Brooks’ home in auction for a sale price of $500.

We moved in here in two thousand and eleven.

My husband and I and my daughter live in this house. We have been married 5 years, it will be 6 year May 21st. Actually, we got married in the hospital after the car accident. We were supposed to got married but the accident happened so we did it in the hospital. I was already out but he was still there for like 2-3 months. We got the hospital deacon to come up and marry us.

This house came available from a friend of ours. She told us that the taxes were paid and everything and she only asked for a few thousand dollars for the house. She gave us the deed and everything. We found out later on that she had previously took out a loan on the house. The loan was just about paid off expect for $2,000, she told us that the bank had paid all the taxes, they were all paid up. We gave her the money for her to pay the balance, we thought everything was resolved because we were told everything was resolved. We specifically asked about the taxes. We went through a realtor and everything. It should’ve been told but it wasn’t. Actually, it was told, but it was a lie.

I tried to get help. At that time I was off work. During the time that I was off work my company terminated me due to the fact that they thought that I frauded some paperwork from Aflac insurance. So they fired me. I was off 4 years before I got an arbitration to go to court and I won my arbitration and that’s how the taxes fell behind.

He’s been disabled since the accident but they denied him his first claim for Social Security disability. That took a year and some just to get the decision that he was denied. We got a doctor who did a full exam and said that he would never be able to work again. We took that information to Social Security because I had appealed his case. I brought the information in and it worked.

And I am not working because I am disabled since 2009, since the car accident. I hate it. I tell her a lot of times, I hate it.

Before the accident I worked all my life starting at 13 years old. I started at Fords in ’76 and ended in ’82, ’83, somewhere in there. When all the big factories took their fall around ‘79 and ’80 there was TRA money, it was like a buyout. Either you go to school or you took the buyout. I went to school. I went to computer school.

I completed it but that but we used the round cards that you punched in with the key punch. I never got a job in computers because that kind of technology had faded out.. They knew what they was doing, they got the grants to teach people who were put off work but it didn’t matter what they taught us.

After that I been doing different labor jobs. I had different decent jobs, nothing was ever really sturdy since that.

We got a letter stating that the house was foreclosed.

Then me and my neighbor went down to Cobo, matter fact. That was when we really found out how serious it was. We tried to follow up then, that’s when the Step Forward came in. We thought it was going to be beneficial.

At Cobo, they didn’t talk about the auction. They were sending people to different rooms to sign up for Step Forward.

I thought I had it all together. I just knew Step Forward was going to help me because I trusted it. But they denied us because they said we took on a house with a debt on it previously. When they rejected us they said we had to pay the previous debt for 2009 and 2010. And we paid 2009 but we couldn’t pay the 2010 so we didn’t get in the program.

They said we had to clear up the prior debt before they would give us any help. So we couldn’t enter the payment plan to pay the taxes until we paid the taxes.

He called me at work. He said, “Baby, we’re going to be able to save our house. Baby, this lady came down to the house. Baby, she is here to help us!”

God works in his own way, that’s all I can say. Somebody that’s just got powers is working. Now that we know about the auction we are excited. Believe it or not. We sit up in here and pray on it. Talk about excited.

This house, we try to make the best of it. It is in good shape but we were affected by that storm, very much so. Some tree limbs fell off a big tree, messed up the roof. You can see water leaking in this light bulb here. Flooding in the basement. We lost the washer and dryer. They said we should just replace it because the cost of replacing the motor. We lost all of our food because we lost power for 5 days. We had just went grocery shopping. It was really bad. We lost a lot of stuff.

We are hoping it will all work out. That’s just another prayer in motion.

Katheryn and Cliffton | Because Someone Lives Here

[…] This story originally appeared on and was created by The Tricycle Collective. […]