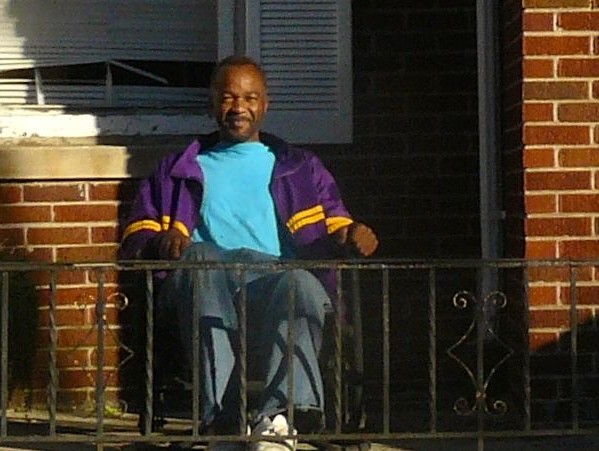 This is the story of Oscar. He lives on Maiden Street with his wife Ann, and their daughter Shantane. Nearly every day, the grandkids visit, which is why they have tricycles in the front yard.

When I met Oscar, he told me he had given up on his home and had quit cutting the grass. He has since regained his hope. It is with great pride that we announce the purchase of Oscar and Ann’s home for $1000- they are homeowners again.

Imagine, if you can, these words spoken in his slow resonant voice.

I’ve been here almost 20 years. I raised all of my kids here, 4 girls, one boy. My son is in the Marines now. I came here to Detroit right after I got out of the military, I did 6 years in the army. Then came here, moved here.

I’m from Georgia, graduated out of Georgia, I went into the National Guard and then into Military, that’s what brought me to Detroit. I met my wife here too, we’ve been married 25 years. All my kids are here but one, my son lives out of state, he’s in the military. My kids bring the grandkids down here a lot, almost every day, that’s why you see these toys. I got 9 grandkids.

Basically the people who are left in this neighborhood have all been here over 20 years with me. A fire ran the people out next door out of their place but they had been there over 15 years. But both of the houses next to me, they have been empty maybe 4 or 5 years now.

There was a block club called Ravendale, but I haven’t seen any participation lately. People used to watch each other but we got so many empty houses here now it’s harder. I think it’s 30 houses on this block and maybe 10 is occupied, fewer people to keep a look out. And that’s probably why my stuff came up missing.

I do Heating and Cooling and Plumbing and all my equipment got stolen from the back yard a couple weeks ago. My plumbing snakes, all my hand tools, my lawn equipment. The air compressor weighed 200 pounds, the snake weighed 300 pounds, the lawn equipment alone was real heavy. That was discouraging right there. You know, I’m already having a hard time so when they took all my money-making equipment, that just put a real stone in the game.

I can still work but its either I’m having to rent the equipment or borrow it and, you know, it don’t look professional when you have to wait for the stuff to show up. You supposed to be a plumber or a heating and cooling guy but if you don’t have the equipment it don’t look right. So that’s a really big problem right now.

A lot of the foreclosure had to do with the water. When you don’t pay your water bill, your water bill goes towards your taxes. So I had a few years where that happened. When I was paying the mortgage to the bank, I was paying them and they were paying my taxes, so that was taken care of. When we finished paying off the house in 2003 the property taxes weren’t included any more, that was back in 2003.

Right after that I got laid off from my job doing property maintenance, and its just been a struggle ever since. I started my own business and I just graduated from Heating and Cooling. It’s starting to pick up but not as much as I want it to.

When I found out about the foreclosure they did send a notice for foreclosure and they told us we could go through Step Forward[2]. And Step Forward had us making a payment once a month and then all of the sudden they sent at letter saying that we won’t qualify for it anymore. We were paying already for 3 or 4 months but they wanted me to have a thousand dollars in my account every month. So that was extra hard for me cause, you know, if I do have a bill around here, it’ll go to that. You know DTE or the water bill now. They’re cutting people’s water and gas off like crazy around here so I don’t even play around with it.

With this Step Forward we thought we had some hope. We went through hundreds and hundreds of paperwork. The lady gave us all kind a hope she told us “you’re gonna be ok, you’re gonna be ok. Just do this, follow these steps.” We had all hopes and that just came to a crash when we had the letter that says we’re not gonna work. The requirements are really tight so if they saw I didn’t have $1000 in my bank then even though I make the payment it doesn’t matter, there are other rules.

When you’re going through Step Forward they tell you don’t go down there to Cobo[3], you’re straight, you’re in the system you don’t have to worry about Cobo Hall. And after it failed with them, they never told me about the auction, that never happened. I never knew I had another chance.

…That was a gun shot. That’s the kind of stuff I gotta deal with. The just stuck his hand out the door. Don’t think I didn’t think about if he’s got my snake. He steal car for a living. I wouldn’t put it past him. That’s all he does for a living is steal cars.

It’s sorta hard to make up your mind you know, do you wanna stay here? It’s a sentimental thing, you know, I don’t want to leave.

If I do lose the house, I do got applications in for downtown, for the apartments, but they’re talking 2 or 3 years wait. It’s a low-income apartment but they’re talking a long wait. If that doesn’t work, I got a number of friends with houses, and that’s what I do I rehab houses. So I imagine I’d be ok. But if I did move I want it to be our home. I’m not in a situation to be renting right now unless its low-income, if you do anything else then they want a credit check.

One thing I learned form the people at Step Forward is that even when you own you do have rent. I have to put aside $125 a month for rent and that is your tax money for the year. I never thought of it that way before. We can do that and put $100-$125 aside every month for taxes and, you know, that ain’t unreasonable for us.

I do think about going back to Georgia. I think about it, but the heat. You know you gotta have some money to live down there because its so boring. Its so hot you stay in the house all day and the mosquitos are waiting on ya. I do make a decent living doing the heating and cooling. I can’t wait for the cold, my phone will be ringing off the hook.

[1] For those who read the article “Foreclosed is Forewarned,” yes, this is the same man who claimed to give up mowing his lawn when he found out about the foreclosure once and for all. Maybe it was the hope of the fundraiser or maybe it was the goodness of his heart, but he gave in and mowed it after all.

[2] Step Forward is the name of the payment plan that is ostensibly designed to help people pay off unpaid taxes and avoid foreclosure.

[3] “Cobo Hall” refers to the one town hall meeting that the Wayne County Treasurer holds for people in tax foreclosure.

saw your story on WDIV tonight and I want to support the Collective.

Oscar | Because Someone Lives Here