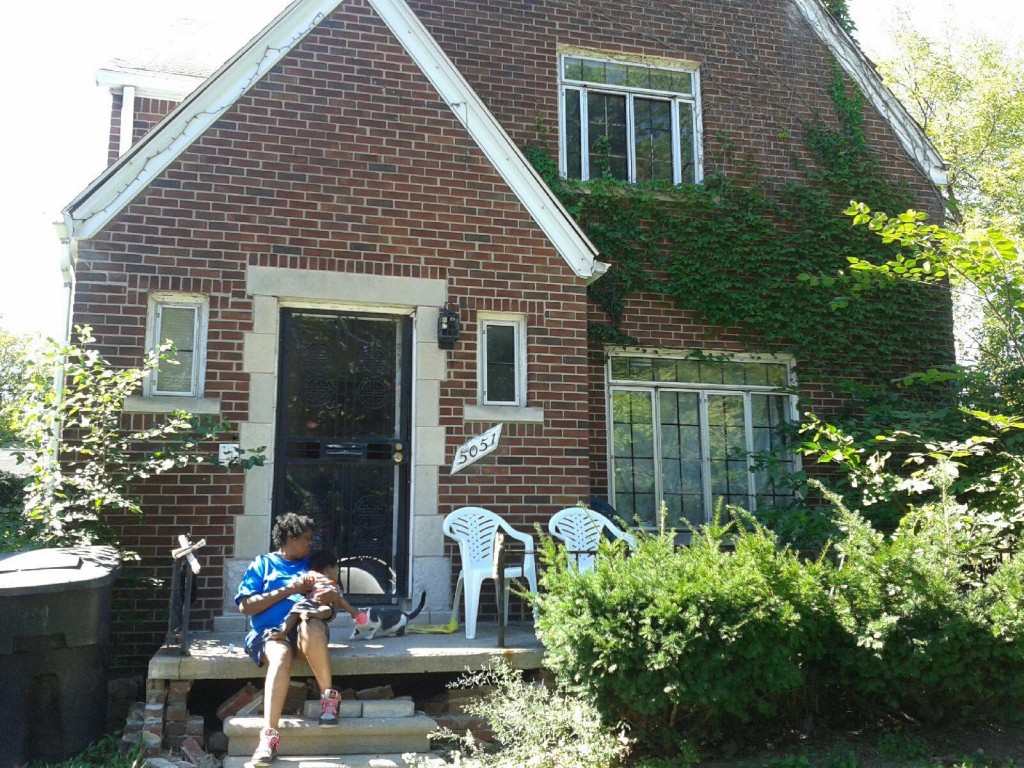 This is the story of June’s long struggle for a home of her own. At the time this interview was recorded, June believed she was days away from receiving the deed to her house. 3 months later, there has been no progress. June is the director of a prison ministry organization and is a profoundly patient and generous person.

Being here, it’s a blessing because, I don’t care what happens, this is mine. I’ll tell you, one time, when I couldn’t pay the light bill, they shut it off. And it was off for like 2 ½ weeks. But every time I came home, I was at peace. I had peace because when I walked in, I wasn’t afraid. I wasn’t even angry that the lights was off. And that’s when I said “God you have really changed me.” He has done great work in me because I had peace finally. In the past I woulda tried to find someone to turn them on but I knew that’s not right and I’m trying to do all of this right.

It started really in 2000 and 7 when I was leaving drug rehab. My kids were god-knows-where, they had been taken from me and adopted out. This was the 3rd time they had took them from me and they told me “you will never see them again.” When that happened I said “ok I gotta do something.” So I went into rehab. I was in rehab 2 ½ years because I had been addicted 36 years.

When I got out, I entered into Traveller’s Aid re-entry program and they placed me on Moross outside of Kelly. It was really nice then, this was in 2000 and 7. And somehow I got a call saying you can get your kids. So I had the house and I had my kids but Traveller’s Aid was paying the rent. And the only income I had was welfare. But I went into training through Michigan Works and got a chauffer’s license and I was able to drive a school bus. So I was able to start supporting me and my kids. But always something inside me wasn’t satisfied there.

And then Traveller’s Aid said “well we gon have to move you to over on 6 mile” and I’m like “yeah but ya’ll know I just got out of rehab, right? Why would you send me on 6 mile? I even owe people over there! I don’t’ want to go back over there!” and so I said “well, you know, ya’ll have been very good to me, I think I’m gonna try this on my own.”

I started paying rent on my own and I was struggling. I mean I was really struggling. But always had this faith that, as long as I got clean, God would do it for me, as long as I was doing what was right. I kept a medical transporation job or $300 a week or it was school busses. But then my rent went up to $750. So I was able to pay a little bit but then I got behind so I got an eviction notice. I started looking around and I came up on Cadieux street, really nice houses. And the lady told me the rent would be $980. And I’m like “Really? Ok” I said ok because I had enrolled in school and I was getting financial aid refunds. Nice houses. Nice neighborhood and everything.

But I still wasn’t satisfied. I was like “man I’d like to have my own house.” I was tired of paying her $980 a month, and then, if I was late it ended up being $1,200. I was riding up and down the streets in the neighborhoods and I came to a 3 mile drive and I got out and I looked at a house with a sign that said “No money down, $5,000 for the house.” It was boarded up real nice. I copied down the number and I called the guy and he met me and showed me the house. When we went in the house, I couldn’t believe it. It was tr-ashed. The walls had holes in them. I said “no wonder its $5000.” He said the owner lived in California and he would pay $6,000 to fix up the house if I buy it. No money down, land contract. I wasn’t really sure if it was real and then it just so happened that when I stepped back out the house, a lady I go to church with, an older lady, was outside her house and she lived a couple houses down. I told her about the house I just saw but she said “look at the house next door.” This house.

They had a lockbox with the keys in it so I came on in and looked around. There weren’t no holes in the wall. It looked good. It had the sinks and the boilers and alla that. When I called the guy, he was real nice. It was a real estate company. He said they only want $5,000 for the house, you can put $300 down and pay $300 a month. I said “ok, land contract right?” He said yeah.

By this time is was 2011. I gave him $300 and I moved in. I came on in because we was being evicted from off of Cadieux. We had to use the fireplace to stay warm. My kids stayed with my sister on Bishop for a couple days until Habitat came in and put a furnace. They didn’t put one upstairs so it was still freezing though.

I signed the papers and everything. And then, about 6 months later, came up about taxes. And I’m like “taxes? What’s that?” I aint never owned a house! But my neighbor had got one also so we went down there and they told me “you can’t make a payment arrangement because the city put a reverter clause on the contract for the house when they sold it to the real estate company.” I didn’t know anything about that, it wasn’t in my contract, they didn’t bring it up. And I was told with a reverter clause you’re not able to make payment arrangements unless your taxes have been paid for 2 straight years. I said “I just got the house!” but they told me “They shoulda did it and there’s nothing we can do and blah blah blah blah blah.”

And so here we sit. They didn’t pay the taxes, and I didn’t pay the taxes, from 2011 to 2012. I learned about the poverty exemption and tried to get that. I said to myself “the real estate company made their money, they probably bought it from the city at the auction and they probably didn’t pay that much for it. I paid them all the way from 2011 through 2012, 2013. After that I stopped because, when, I went down to the United Community Housing Coalition and they said “stop paying them rent for the land contract” because it was already reverted.

So I was told stop paying and that was around the time it went into auction. I went to U-Snap-Bac, did all the courses, got all the certificates. Budgeting, planning, fine. And finally they agreed to help me because, like I said, I’ve been here since 2010. I was told in the past they couldn’t help me with taxes on the land contract.

I guess that after Duggan came into office they did away with the reverter and they started allowing people to make payment arrangements. I went down there to Cobo in 2014. It was so many people down there and I felt sorry for them because they was trying to keep their property. I stood in that looong line. It was slow. Yeah it was a blizzard. So I finally got up down there and they start typing up numbers “this is what your down payment has to be. They wanted $3,900, down payment. And almost like $600-700 a month.” And this was their idea of a payment arrangement! I looked at them and said “you got jokes, right, ha!” and so I took the paper and left.

United Community Housing Coalition, thank God for them. I’ve taken a lot of people down to them, they do so much good work. They said “save your money, and when time comes to bid on your property, bid on your property. Start real low, and bid at the last minute. I watched my property every day. In the auction and nobody bidded on this house in the first round. Actually nobody bid on it in the second round either because nobody could bid on it– it was in the blight bundle. And that was a mistake, it shouldn’t have been in the blight bundle because its not blighted!

It’s not blighted at all.

At some point, I went back to U-Snap-Bac and I took a class, we covered everything. I met Linda Walker, she was so knowledgeable. She just took us through so much stuff. After that, they said, you take that certificate and you get the deed. Apparently, U-Snap-Bac and 3 other entities have the power to say to the land bank “release this property to us, its in our jurisdiction and we are working with the people who live there and we want them to purchase this house.” Now the Land Bank, 9 times out of 10, they will agree because they want to get rid of those houses, they have so many houses. So that’s what I’m waiting on now.

But its nothing but God, working this out, and I’m gonna ask him “can I please have my deed.” Once I get the deed, I can apply for homestead, poverty exemption. I can’t wait to get the roof done. I ‘ve been looking at other peoples houses, get the lights in the ceiling and alla that.

So I know this is all a process that I had to go through and that God is allowing me to go through. And I think my Assignment is next door too– the lady I go to church with, she’s older and she can’t get around so she can always call me and I get her everywhere, take her all around, to the doctor. And I feel like thats what I’m supposed to be doing anyway, after this house became so available to me. But if I hadn’t fought for it and went to the process, it would be gone.

The main thing I would suggest everyone is just keep fighting and whatever you do, don’t leave. Don’t walk away because once you walk away they can take possession. I have been praying since I came into this house. “This is my promise land and I’m keeping it.” Ok so I don’t care what I gotta go through. I gotta fight for it. Children of Israel– they didn’t just walk in, they had to fight for that land. It started with Jericho. This is my promise land and I’m fighting for it.