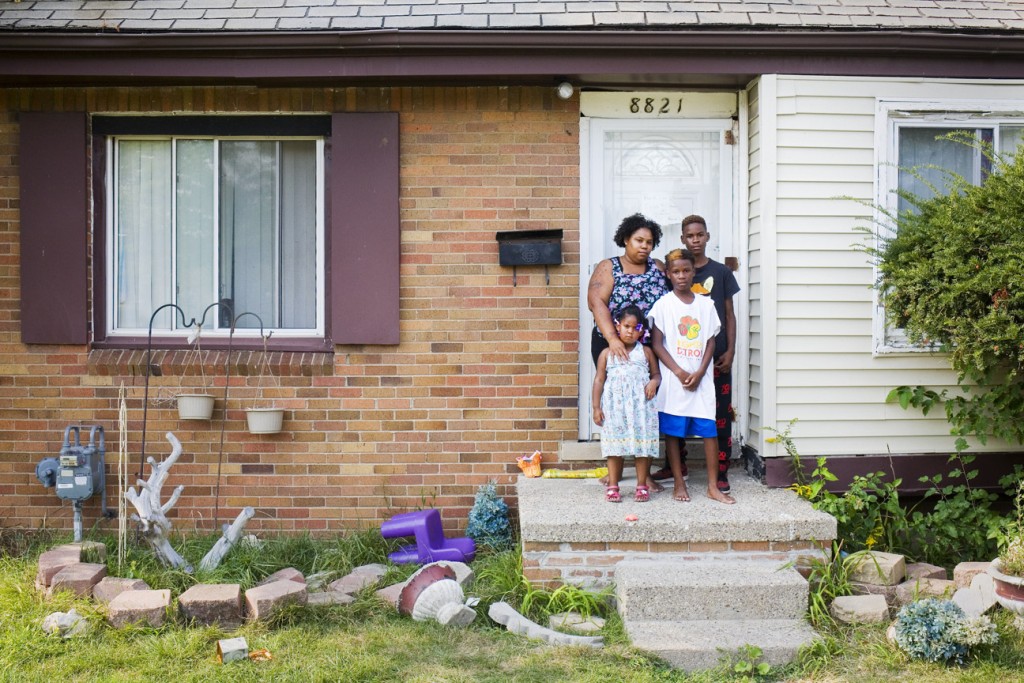 Shakiya and her husband Warren live with their three kids in a home that found its way into this year’s tax foreclosure auction despite their regular mortgage payments. Who knows if it was incompetence or intent on the part of the chain of bankers, brokerage firms and individuals who form the lineage of this home’s past, but what’s clear is that the ones who stand to suffer the consequences are those who are not at fault. Now that they’ve fixed up their house from the shell that it once was, Shakiya and Warren are saving every penny and bracing themselves for high bids in the auction from those who seek to benefit from the hard work they’ve put into it. Nothing is certain.

We didn’t know that the house was foreclosed on, or was up for foreclosure. One day I went and got the mail out the mailbox and there was a postcard, saying “Homeowner: Call 411 for help to stop foreclosure on your home.”  I actually just set the postcard to the side; cause I’m like, “this doesn’t concern us.” And it just kept bugging me for the rest of the day, so something told me the following morning to get up and call. I called and they were telling me that the house was going up for foreclosure. I couldn’t believe it.

I came down to 400 Monroe with the paperwork and looked into it, and they were telling me that we wasn’t the actual owners to the house. We never even had sufficient paperwork to the house.  And they were like chewing me up about not knowing anything about the foreclosure like as if I was scamming them…I’m telling her that none of the tax papers were coming here. I’m just trying to get the information for my house.

We found this property though a company called Paramount Land Holding, they had a sign in front of the house that said “Quit Renting, Call This Number.” We called the number, matter of fact we still have the sign.

Now we been here for six years.

We didn’t move into it right away like that, we end up putting the kitchen in and the bathroom, and some of the windows. Enough for us to come in and work through. Me and my husband, he’s up day and night scraping walls, making sure the old paint is off so we can come in and re-paint. At that time we were back and forth with my mom, then we finally got in enough for when the kids were able to go to their room, and get them situated. So we started from an empty shell, to building something that we thought we were paying to stay in for years.

From the first day we saw this home. We walked in, he looked around, I looked around, with the potential of the house we were like this is something we can fix up and make our own. I’m like we had small children at that time we didn’t have the youngest yet, we just had the boys come into the home, and then she was actually born in this home. So we been in here just making in our own family home, to go down there and they tell us that the paper work that we had on the house is not the correct paper work, and there was nothing that we can do.

It was a land contract, we went down I want to see who was the last person, the last deed holder, it was Bryce Peters Financial, but when you Google Bryce Peters they’re not even real. They’re non-existent. And then the guys that was in on everything, something Castanza, but he’s supposed to be in jail, I guess his accomplice killed himself or something… but from Paramount Land Holding it went to Town Mortgage. Town Mortgage never gave us sufficient papers stating we were the owners of the house, they just called one day that we should send the payments to them, and they actually start sending our billing statements, which seemed legit, everything was fine, they would call monthly if you’re late.

So we just thought we were paying our mortgage.

Yes, and with Paramount, when we went into the agreement with them, my husband wasn’t on the paper at the time, when we first got the house me and him was still boyfriend and girlfriend, me and him was just actually getting ourselves together, and then we soon got married once we got in here, so my name is the only name on there, but when I went in what they told me was “we pay all the back water bills, we pay all the back taxes, you’ll pay X amount of dollars a month, you’ll pay mortgage, and some of it will go towards your property taxes.” So we’re thinking we’re paying, we’re never behind unless its Christmas we give up on Christmas and then pay all in January, to come to find out that the house is $31,000 behind in property taxes. When I go down to 400 Monroe and they telling me, “Oh if you give us $6,000 today we can keep you off the list.” I’m like “I don’t have $6,000 today.” That’s not something that you just reach into your pocket for. And it should be Town Mortgage to pay that, not me not me, I’m caught up on my mortgage!

I had made several calls to Town Mortgage asking them for paperwork to state that I owned the house, or whatever contract they have written up from whoever they purchased the house from. They sent me to a cash receiver, now David Findland from Findland Law? I think that’s what it’s called. I never received a call from him. When I called Town Mortgage they places me on hold, they never get back to me.

And every time I request actual paperwork, “can I see what’s being paid, what’s this, I wanna know about that, what’s behind…” they’ll say “Oh we’ll get that to you.” Never.

And that’s how it was rolling with the new cash receiver, there was a cash receiver before David Findley. When I talked to him, he actually called, and you could hear people laughing in the background and he was like how about I give you a call back in an hour? And that never happened.

A 15-year mortgage was what we thought we were paying into. But to get that punch in the stomach and to say that the paperwork you have is not legit. And it’s like, with us coming into a shell, it has been basically a project. We can only do one room at a time. Right now we need a roof, it leaks. But that’s not a big problem to us. Because we now after a while, once we, get everything situated, we worked on the basement, we tried to do a finished basement now we worked our way up to this floor so the kitchen would be next.

And I’m thinking, he would climb the roof, and my son here, and we’re going to patch it up, whatever it needs to be done, I don’t want anybody to come in here, I don’t want to lose the house.

Yeah, we built a foundation here. Like I said my kids have basically grown up in this house, they know the area, they are well known. The school is right down the street and they have been in there since Pre-K. All of them. My oldest is in high school now. My little girl starts Pre-K in a few days. So just to walk up out of here? It’s goin to crush me.

I invested everything in me to build something for them. This house is not even for us, cause as we get older, we can go. What do we need? This much space. [] But for them, if they’re ever in any kind of trouble when they get older, this is for them.

But I don’t want to put anything else into it until we know for sure it is going to be mine.