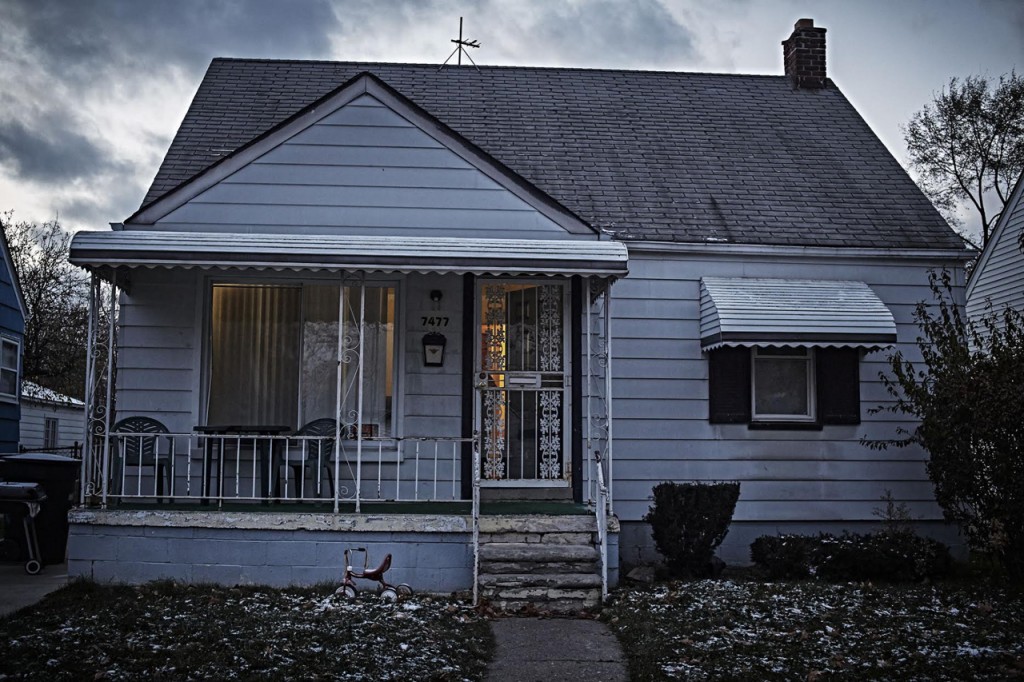 They used to call it downsizing -but that wasn’t very popular.
So then they called it “right sizing” -but everyone knew it was the same thing.
Then they started calling it “Future City”- and of course the people knew better.
And so, they didn’t say anything.
Silently they issued yellow tax foreclosure notices
and water shut-off trucks by the thousands
like a drone strike time bomb.
“That’ll do the trick.”
But even though they’re not talking, if you’re paying attention, you’ll know
that there are active forces of relocation and de-neighborization and gentrification
alive and well in this city.
And this is not eminent domain- there are no relocation checks.
This is “your fault” and “don’t let the door hit you on the way out.”

Tear the buildings down once they’re gone and now we’re on
to a fresh start without those pesky people.
The perfect plan for a city trying to lose a little weight.

And this wouldn’t be so frustrating if it weren’t for the fact that there is a way out.
A really good, really reasonable way out.
You can buy it in the auction.
You can get your home and a fresh start for $500. Incredible!
But not if you don’t know about it.
Not if you don’t even know to look
Because you don’t have the internet and if you did, how would you buy a house with it?
Because your landlord wants to keep getting that check every month so he tells you “it’s all taken care of”
Because you’ve been paying your mortgage every month so why would there be any kind of trouble?
Because you never got a tax bill to begin with let alone a foreclosure notice,
let alone a solution.
Because every time you went downtown to get answers they pointed to a number with four zeros behind it and said that was on you to pay
and that’s the only way.

In the auction, there is no guarantee.
You might get outbid in the first minute,
you might get a lesson in reality estate:
“didn’t you hear this neighborhood is hot?
didn’t you know Detroit is coming back?”
But at least this way
you had a seat at the table
at least this time
you were a participant in your own fate.

So that’s why we’re out there talking.
We start on the doorstep with some Good News.
Not that kind,
but the kind that says you could own that house you call home.
You could break that cycle of a landlord who doesn’t give a shit
or the bankers who, like wizards, change their LLCs or their T&Cs and leave you no choice but to sign or walk
to an uncertain future in a city that will maybe treat you better
your baby’s toys left behind in the winter snow.
We’re out here because there’s a way out
There’s a way to stay put instead of move out

There’s a way to get a deed with your name on it and some pinch of security
That you do belong
And yes enroll your kids in school,
say hello to the neighbors,
touch the earth of the garden
and for god’s sake fix those stairs.
You don’t even need good credit.
But you do need to know.
So I really hope you answer when we knock on your door.