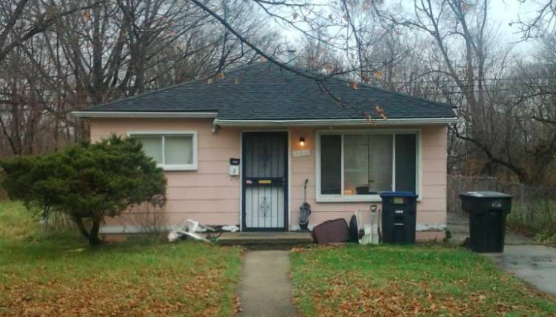 The Tricycle Collective has been working with Miss Fayette Coleman for over a year. In all the time we’ve known her, she has never had running water. Until now. Last Friday, Fayette moved into a new apartment in midtown Detroit and treated herself to a Nice. Long Bath.

Here is her story, in a nutshell.

Fayette, like many Detroiters, rented her home from someone who didn’t pay the taxes. He also failed to pay the water bill, which is why her water was shut off 2 years ago. Fayette struggled with the DWSD for months trying to get the excessive overdue bills paid.

In the fall of 2014, Fayette’s house was one of about 5,000 occupied homes in Detroit that went up for sale in the Wayne County Tax Foreclosure auction. She could have bought the home for $500 if she knew about the foreclosure or the auction, bu the did not. As a result, no one bought the home and it fell into the ownership of the Detroit Land Bank Authority.

This is where The Tricycle Collective got involved, we hoped to advocate on behalf of people like Fayette to create a path to ownership for the residents of land bank-owned buildings. We wrote letters to the DLBA, visited public meetings, and Fayette spoke to the board requesting the opportunity to buy her home. We were told a pilot program was in the works but in the meantime, a full year passed where no progress was made. We received $500 in donations for Fayette that we have been waiting to spend because the land bank wouldn’t accept it.

One full year later, Fayette still had no water. The land bank announced a owner buyback program to the press but still, no one contacted Fayette, there was no ready means to own her home. Throughout this time Fayette was receiving water donations and support from the Detroit Water Brigade, and hoping to find a way to make the home her own.

In December, an article about Fayette in the Detroit News seemed to shame the city into action and she received immediate support from Southwest Solutions, who promised to find her new housing before the new year. We dropped our efforts to buy the property back from the land bank because Fayette said she preferred a new start anyway and there was new housing ready at hand However, clunky paperwork and the fading limelight slowed the process and she was still in the waterless dirty home through January, then February.

One week ago, Fayette let her cat out on the front porch as watch as feral pit bulls snatched it up and killed it before her eyes. This was the final tragedy– she was ready to get out of the neighborhood for good.

Now, Fayette is comfortably settling in to her new home. She is taking pictures of the cityscape out her window and enjoying the comforts of indoor plumbing. It’s a crime and a shame that she went without it for so long, but we are so happy for Fayette and so moved by her patience.

As for the little pink home, there doesn’t seem to be any future. As one of the land bank’s 10,000 occupied homes, it at least had a chance. Now, it will be demolished sooner, or later. Yet another opportunity lost in the bottleneck of bureaucracy where people are asked to submit to herculean feats of patience and inhumanity in the course of daily life. Fayette doesn’t have to be a martyr anymore, we are so glad she is finally in a new home which she so greatly deserves.