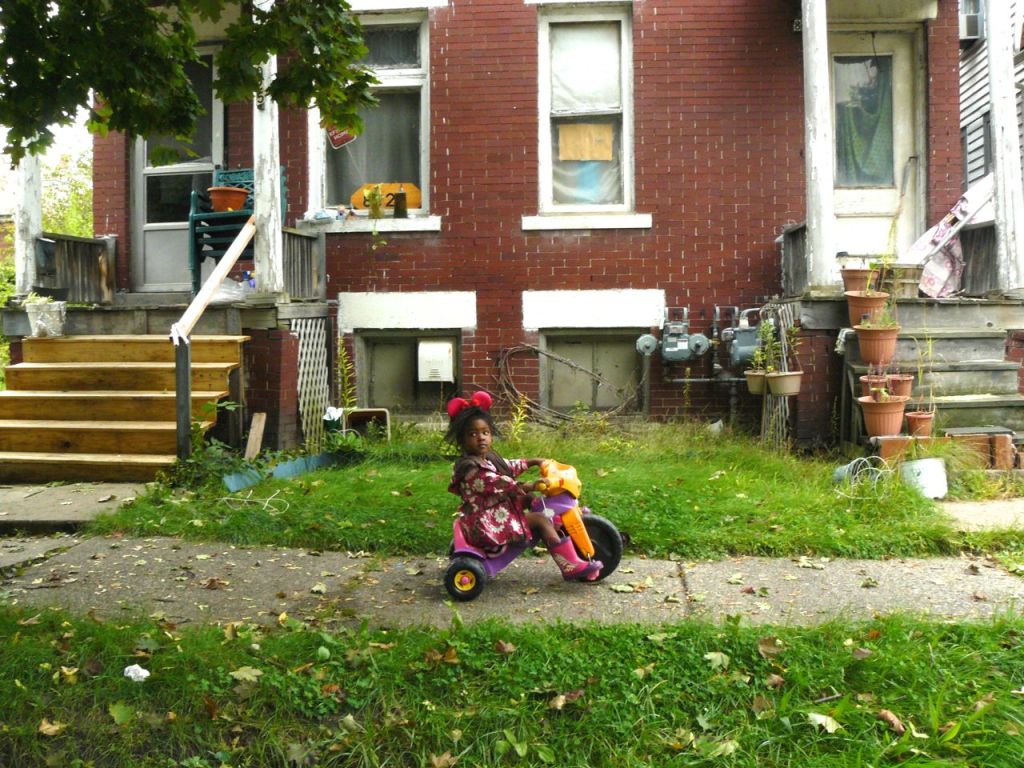 This is the story of Esters Family and their home, as told by Arquesha. The Tricycle Collective helped the Esters with their home back in auction for a selling price of $600, keeping the family tradition alive a little longer.

My name is Arquesha Esters. In this house it’s myself and my husband, DeAndre Esters and our two daughters Dean- Ginae Esters, who’s about to be 4, and Genesis Esters is 2.

This house has been in our family for 5 generations. First it was my great-grandfather, he passed away at 103, then my grandfather, my mother, my self, my children, and everybody who falls into that. A hundred people’s different mail comes to this address. Different people in my family have different situations so people migrate back here, or they send their mail back here.

I didn’t necessarily live here my whole life but this has been the only thing that’s steady; the only phone number- steady. And, this is the only property in the family that we really own. No one else in the family really had an opportunity to own their own home. So this is it. This house is the anchor and the only one.

My great-grandfather and great-grandmother bought the home. He just passed away recently so, he lived here the whole time. He was born down South and migrated with the great industrial movement, you know, $5 a day. He retired from Pepsi. just down the block. He moved up here and bought this home and they just stayed.

I met Deandre in California, we was living in California and working and travelling, you know, no children. We’ve traveled, we’ve lived in Columbus and Cleveland and Lansing. Then my great-grandfather passed. And people started scrapping on the house because, you know, no body was living in it. They took the gutters and all the guts and bowels of the home.

The whole time while the house was empty the water was running. There was $4,000 worth of water that had pumped in the basement while nobody was here. They had taken the pipes. It was crazy! All of the utilities were still on. Nobody turned off the electricity or the water, we left everything running. My people were still in and out so they didn’t want to turn that off. And in Michigan, you don’t want to turn the water off or the pipes will burst.

The family needed somebody to come and live in the house so we moved back down here and it was not even the house that I remembered because they had torn it up. Like I said they took everything, they took the wires for the electricity from the post to the house.

We moved in, we was living here, we had to replace everything. But then they did, they robbed us again. It was fresh stuff. Some of the stuff wasn’t even hooked up yet! We had locked the main level and the upstairs but people came back and took stuff from the basement. They took our washing machine and our dryer. You know, the things we had just replaced. In broad daylight you know, we wasn’t out of town! So they didn’t get a chance to take all the stuff we had upstairs, but still. They scrapped us twice.

So we got the house back together, and 3 months after we had moved in, Dean-Ginae was born. And she’s turning 4 now so that means we’ve been here 4 years now. She was born, abandoned, drug addicted. Her mom was a distant family member of mine. And they called me at the hospital and said they needed somebody to get her. So I went as soon as possible and I got her from the hospital and took her home. She has been in my care. She doesn’t know any different.

There was no 9 months of preparation, no baby shower, nothing. I’m 32, so I was in the world a long time just me. We went through that, her being sick. And you know, I’m a student, but everything had to shut down for the baby.

So we got used to that and then 22 months later, Genesis. Same situation, same mom- and she doesn’t have anything to do, she don’t reach out. And we’ve been here, nothings changed. But she does nothing to help. I’ve raised them both. They were born so sick, nobody would keep them. Of course not, you know what I’m saying. And she’s 2 now!

I think its different for us, it’s not like I was pregnant for 9 months. It’s just one day, you got a kid. It’s not like, you know “She’s pregnant, she’s making a decision” None of that.

So we are paying to live, every day. Remind you, there’s no jobs around here. Before we came here, we was working. “I was working for a company that makes the pieces that go on a windmill but then everything happened with this house so we decided to move here to, you know, save her family house. I did it for her.”

The house is old, heat’s going out the windows. It’s so hard to save money and then you come in, in the negative, it’s hard to save money. And you’re trying to live. You need all these pieces to live- to stay warm, to flush the toilet- you now? And all the time these kids need things. They don’t really care that the house needs work, their feet are growing. This is just an old house. And we love it and we want the house.

I’m in school now, I Just graduated in June. I got my Associate’s Degree in Applied Science but I’m going to school now for Criminal Justice and Social Work.

I want to keep this home, I want to fill it up with foster children- he was a foster kid [indicating Deandre]. So we want to have foster kids. So when I graduate I want to have a halfway house or a group home.

I would have 4 young girls, like 12 to 18. Or even after they phase out of the foster care once they’re 18, they haven’t had a chance to really watch anyone function in society and they have no where to go. Growing up in a group home, they could use some help, those older young adults.

I would love to have it in this building. It’s a big structure, 1,900 square feet. It’s a duplex now but I would make it one big house. We started working on the upstairs when we first came but we had to stop working on that because we had to save the house first.

I have 2 years left until I get that degree. I could probably do the fostering now, without the degree but I would like to show that I am serious and I’m invested.

I see everything in this house, that’s a huge part of the dream.

When I was a kid, I used to run up and down this street and it was just houses. I had to stand to the side just to get between them, just to get through. Now there’s like 5 houses on the block.

What’s happening is they’re foreclosing on homes, and people are scrapping them. Like this house over here, the Long’s. They lived in their house just as long as we did. They lost the house to foreclosure and moved out, then people started moving in, scrapping on the house, drug dealers in and out. And now, you can see the aluminum siding coming off.

The people moved out because they lost the building to foreclosure. It went into auction and somebody bought the house. Those people bought the house, they started working on it. They took a lot of new stuff into it- new tubs, new toilets, everything. But they just never made the move, they stopped coming back. So the drug dealers moved in, I can’t stand it.

When you get rid of people, it’s not like someone’s moving in, you know, and then the neighborhood is a better place. That’s not what’s happening. People are buying auction homes, and then they’re just leaving them blight.

That other house over there, at the end, was taxed off, auctioned off. But the owners found out about all the problems and just never came back. People scrap on it so quick. And you call the police? They don’t stop them from scrapping. I’ve called them. They don’t come for that. They didn’t even come when we got robbed.

But my neighbors are the same neighbors that’s always been here. The lady across the street, when we were kids we used to play together. There used to be a big tree right there. And the other lady next door, I grew up with her daughter. And the Long family, they were always here, and I see them all the time, they still come back. When you ride around you wonder who everyone is because you don’t know nobody, but these are people who have been there for years and their children grew up together. And I think that’s important, because you don’t see that a lot nowadays. I really remember these people, when my mom and other people in my family come here, they know everybody by first name. And we still have some other stuff, we have drunks hanging out on the corner. But we do have farms sprouting up too.

I don’t know, but I don’t want to leave.

I would leave Detroit. I wouldn’t want to live here no more. I couldn’t imagine being in this corner. I think I would move to- not Chicago, it’s too expensive- but definitely somewhere else. I would want to go to somewhere warm like Arizona. I got a lot of family there. I think I would just leave like everybody else. Where it’s sunny and pretty. If I can’t stay here, you know, this was my mama’s bedroom when she was a kid, I would leave Detroit.

I just love Detroit. I know its raw but when I hear her say she would want to go somewhere else, I don’t know, I like Detroit. It’s cool. It’s affordable here, you can start something up real easy. It’s just a laid-back place.

I know I could help more people here than somewhere else, that’s what I want to do. But if I lose this house, I would be scarred. It’s like “Detroit’s not helping me!”

This is a great location. We’re minutes from downtown. Detroit is like when a fire burns down the forest and then everything spreads and new life starts to grow. That’s what I see for the city of Detroit. You hate to leave because there’s life here!

They call this the Hope District.

Where do you live?  [To Dean-Ginae]

Where do you live? [To Genesis]

Arquesha | Because Someone Lives Here

[…] This story originally appeared and was created by The Tricycle Collective. […]